Warning: Creating default object from empty value in /homepages/12/d535448593/htdocs/app535449647/wp-content/plugins/widgetize-pages-light/include/otw_labels/otw_sbm_factory_object.labels.php on line 2
 Peru at its best !!! – www.FiveElementsTour.com
Home Daily Activities Peru at its best !!!

18FEB2015, Santa Cruz de la Sierra / Bolivia
Time to look back on the past weeks of travel and the highlights. I make a little step aside from the reports before, which are based on a daily diary and rather try to express the feelings that appear while riding Peru.

Getting to Peru, we choose a rare route that had some muddy, slippery and challenging part. But Joy. Se ethe pictures.

The southern High-Andes of Peru have been really great riding days; one by one. Just to make clear, Lima is at sea level, reaching Huancayo in one day meant to pass over 4818m. Little hale joined Felipe and Silviana on their Suzuki V-Storm and me that day, followed by 2-4 cm of wet snow (so not frozen) and on the east side which was down hill. We mastered it without major issues, at 2 degrees Celsius however it was a little chilly.

But after that day what we saw was just unbelievable, and the riders among you might understand and feel the joy we had. We have been between 4300m and 3900m in altitude. No trees. Rocks and low grass was all. Brand new asphalt. No traffic. But the incredible was that almost all the time the next 4-7 curves have been visible. This was new. In the alps you see into the curves, if lucky you see 2 or 3. But there, like a race track. The engines have been shouting. Gears have been shifted late. Breaks went hot. Amazing ride and heart beat. My soul was full of joy.

With Felipe and Silviana it was good riding. We stopped every now and then for snacks, coffee and pictures. I liked it. From Ayachucho we went to Ollantaytambo. For what ? Machu Picchu was waiting for us. It was a straight ride. We left at 7 am and arrived between 2pm and 3pm, secured the bike and only with the backpack for a day we took the train to Aguas Calientes. We stayed the night there to have a early approach to Machu Picchu. At 7am we left with a bus. It was the touristic and comfortable way, but hey, who of the 1600 others that day (the site is limited to 2500 persons/day) came from Alaska by motorcycle… We got of the bus, the fog cleared up and the sun came out. Just like ordered. We had another 200m meters hike, and there it was laying in front of us. One highlight of my trip, Machu Picchu !

The pictures tell part of the atmosphere, the 360 degree view it cant catch, nor the heart beat looking at it. It is really remarkable place and in shape. Peru does a good job here. It was not cheap, but worth to come here. Coming down to Aguas Calientes after the visit of the entire site, we have been lucky to find a French patisserie. We had awesome coffee and “Pain au raisan” (German: Rosinenschnecke) , like I did not have one since long time, probably 8 months. For that reason we took two and a hot chocolate on top.

We had to leave for the train to Ollantaytambo and, that one had incredible big windows so we could see the entire valley. The sun came trough it was just great. We saddle the bikes and reached Cusco after one hour, as it started to rain. What a day !!! Blessed and sheltered.

Cusco kept hosted us comfortable for a rest. So we did. The city center was beautiful and clean compared to other cities. Maybe the money from Machu Picchu helps also. The cathedral there was magnificent. Haven’t seen so much wealth in a church before in South America. Similar to the one in Sevillia in Spain in terms of wealth. A huge building and decoration on every square centimeter. Unfortunately it was not allowed to film or take pictures, and a entry fee have to be paid, but more than worth it. (Pictures here I take from Wikipedia)

We left Cusco heading west. My target was Chivay. Felipe and Silviana wanted to go Arequipa. Again we found a road like the one in the mountains south east of Lima. Incredible view, dry day, curves and asphalt of its best…. then it need to happen … and the following days … have been of another kind.

I stopped to return some drinks/water some grass. As usual Felipe and Silviana went ahead and I would catch them. Then the junction to Espinar. Couldn’t see them. Asked some locals. they haven’t seen them. It started a heavy rain. I stopped at a hospital to take my rain gear. After I couldn’t find them no more for like one hour and then I left for Chivay, in the hope they are fine.

I found a road that took me into the right direction. After some 15km or so I hit a “Baden”. Baden’s are concrete shallow constructions in the road where the river can flow. I saw that that Baden was deeper than usual but not that it was 50-60cm deep. The current was strong. Right in the middle my engine died. With all my weight on the left leg I could just hold my bike and lean it against the stream. One second I just hoped that the engine will start again. Else I will lose the bike and gear right here. And it started. And it did not sug in water. I was sheltered again, with high turns from the engine the bike pulled me out of the water. This time my heart jumped because of fear. I was alone in a circle of about 10 km. I thought about what will be next… but going back and taking the risk a second time was not a option. I faced two more Baden’s of similar type but a little better to cross until I found the real gravel road that I should have taken…. I was completely wet and after a construction on the road and a break of 10 minutes, I started with the ABS off. What a stupid idea. I toped it some km later with the idea of a breaking test. And, yes, I crashed that way. Without any opponent. Without any reason. I dropped my bike and body with a classic highsider. For the first time with heavy impact.

Panniers bent. Panniers holder broken. Front fork oil leaking. Front indicators both destroyed. So was the hand guard on the left side. Wind screen heavily scratched. But the bike started. Others helped me to lift the bike later. Lucky in that situation with all the damage I made it back to Espinar at the speed of 25km/h, not to damage more.

Found a hotel at 4pm, pharmacy next door for pain killers and a mechanic, which turned out to have time for me in the morning. I couldn’t contact Felipe and Silviana. Later it turned out they stayed in the same city at a other hotel, because of the rain. 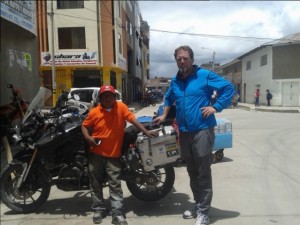 I went to Oscar in the morning. Helped me to be back on the rd by lunch time. A fellow welded the frame of the panniers, we fixed the front fork and the other issues. The owner of the hotel, Gregorio, helped also. Teamwork in Peru at its best. Had difficulties to leave the city again, but with the help of Gregorio and some locals I made it. And a ride was in front of me. Time pressure for limited daylight remaining and off road, following the GPS without seeing the road…. like navigating with the sky. Along a river, passing a archeological site, beautiful as Machu Picchu, following the river, passing “tres canyones”, a place where three canyons meet, light conditions …. just beautiful, some water crossings that really have been challenging, since muddy, but then the highlands, so beautiful… In my last days I will tell from that day… just before sun set started I reached the asphalt road. 20km to Chivay. I farmers boy, probably 10 years old was running aside of the road and trying to make it home before the rain. My bike is fully loaded. Cant take anyone. I asked him. How far? He said “dos kilometros a casa” (Two kilometers till home). I pulled out my left leg; he sat there with his legs on the engine bar and his hands on the warm handle bar. So we went at speed 70km/h through little hale and the first drops of rain, … cold but dry at home. I went on to Chivay. It was just dark when I reached the Plaza de Armas, the central square in all latin cities. I hoed in a coffe shop to get internet and find a place. A lady stepped by and said she has a hotel some blocks away. Off we went and a nice, clean dry place was my rest for night.

I woke up at 5:30, since I needed to check my radiator. I was missing water. Plastic parts off, water refill, plastic parts on, 7am I left. I was in a hurry to be at the Mirador del Condor in the colca canyon before 8 am. In the morning and the thermic air the condors circle there and I wanted to see them. Successfully managed. 🙂
Then the Colca Canyon in front of me. It turned out to be 220km off road and 50km asphalt at the end of the day. In the beginning it was fun, in the middle a challenge and at the end a fight. I got tired. My muscles hurted. I don’t remember how many hills and valley I have passed. Numerous curves. Longest time between meeting people was about 2 hours.
The snow covered mountains aside changed for dust dry ones, rocky roads, heat, dry Baden’s, incredible views, clean air, silence, loneliness, joy and respect. I reached Arequipa and found a hostel just at the spot where it need to be.
Secure parking. Single room. Space to wash my gear and heal by wounds… I stayed 2 nights. If anyone gets there visit the Monasterie St. Catalina. … Just beautiful, in shape and stories to tell.

I loved my stay. Left for Puno at the Titikaka lake. There I found a 4 star hotel and said yes. Puno hat a pre-carnival procession with 100.000 people on the street. They invited my for free beer and it was cool to watch them and their way of joy. Far low budget compared to western carnival and Rio de Janeiro, but authentic and beautiful to see. I left out the visit of the floating islands made of straw only, for the chance to go to Copacabana in Bolivia and to meet Felipe and Silvana. We wanted to go to Lap Paz together. But it came different than expected. This in the next post about Bolivia.
In short, Peru was at its best. Great Mountains. A bee bite. Archeological sites en masse and Machu Picchu. Cuy. Curves. Nice people. Tall mountains (record 4818m). And much more. 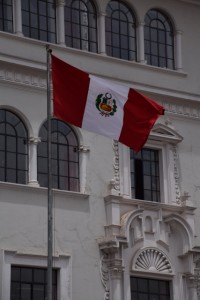 As conclusion: Peru, worth to travel and riding the motorcycle at its best.