29AUG2014
From Sault St. Marie, Mi US to Thunder Bay, Ontario Canada (720km)
It was supposed one of the best rides to be, along the north shore of Lake Superior, however it was very cloudy and the rain test for me (last 6hrs have been wet, met other bikers in jeans …) and the equipment. Arrived in Thunder Bay, had a dinner and that was it. Searched a while to find a place. Enjoyed it though. Booked a hotel in Winnipeg for the next day, to avoid searching again.
The guys in Canada have a speed limit, however go a 10-15% over the allowed speed, which makes the long distances a little shorter. I assumed a simple calculation: Heads per square kilometer is quite low in Canada, so should be policemen per head… and proved well that way.

30AUG2014
From Thunder Bay, Ontario, Canada to Winnipeg, Manitoba, Canada (700km)
Clouds in the morning, that cleared up and resulted in a dry arrival in Winnipeg. Again greater 700km in one day (that’s equal to Regensburg -Hamburg, and back the next day).
For hours there is only forest, forest, forest and then suddenly it opens up 200km before Winnipeg into open field and farmland, ready to harvest. Golden brown fields as far as you can see, a straight highway and that’s it. First time for me to see it and joy, since I am only driving through and to be part of the game. Hotel had no parking, so I parked at hotel next door which was fine.
In the evening I went to a Hip-Hop slam next door, which was great. All about 20 years younger, but great art and entertainment. Incredible what people can do in terms of moves, spins on the head and jumps. Had a late start the day after.

31AUG2014
From Winnipeg, Manitoba, Canada to Saskatoon, Saskatchewan, Canada (780km)
3rd time greater 700km, almost 800km. But was not that hard. No traffic, empty connection of villages and farmland, farmland, farmland. Stopped at the petrol station and everybody knew everybody, except me. No stress at all. Time on a different scale. Again thumbs so many times and a guy at the pertol station came out for a smoke and said “What a Triumph ? Last one I saw was 30 years ago…”. And on we talked… about the old days and that I am doing the right thing.
Talked to a guy who told me he knows a farmer in Alberta who operates 13.000ha (no typo), so the farmers in Straubing think they are big players … I tell them next time in the Bavarian beer tent, that they are not. 😉

So a remote, joy at its own style this Saskatchewan province

1SEP2014
Saskatoon, Saskatchewan, Canada to Edmonton, Alberta, Canada (580km)
Short ride, 600km only, this flat lands and then little clouds, easy to believe that mankind thought for ages that the earth is a disc.
A Pepsi truck driver said “Hey when you are done with your trip, come back to Edmonton and work for the petrol industry. YOur are a german engineer, we look for you guys to keep going. Life is good here! Think about it”. He was a cool guy actually.
Edmonton, a real city after 1000km of more or less empty land. Can feel the stress already coming from red traffic lights when you are having a vehicle behind you that want you to jump start as soon it turns green (yellow actually) …

Took a little while to find a hotel. Came in an the receptionist started to talk in Russian with me. I responded in German. She said ” I do not understand you !” I said “So do I!” We both laughed. It ended up with that I parked my motorcycle in the lobby of the hotel. I heard these stories and expected this to happen further south, but no Edmonton Alberta, is where my motorcycle lost virginity to park in a hotel lobby.
Remarkable date: Day one off Conti, steel feels strange; since I changed the clocks for a while. 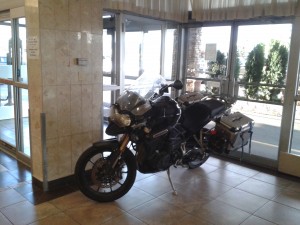 2SEP2014
Edmonton, Alberta, Canada (service day)
had my 20.000 miles / 32.000 km service on the motorbike at Triumph in Edmonton. Great guys at Echo Cycle. Big thanks to Ben and Dave. I was two days early agianst the planned date they have booked me in for service and they got me a set of tires complete in the same day and mounted. Big recommendation for all who come through here by motorcycle !!!
Shopped a little, found my camera, killed the time successfully.
Was already 6pm when the bike was ready. Decided to stay in Edmonton one more night. Went to the hotel again. Natalie, the receptionist (age close to Mom’s, just to avoid misunderstandings), looked up and smiled when she saw me. Her boss was next to her, like sixty something too, he asked “Hey, nice bike (motorcycle), where do you go to?”. “Alaska, then south” I said. He said “To bad, you are late one day, yesterday there was a German here too, on the way to Alaska. I missed him, but you should have met him to travel together”.
Natalie said “It’s the same guy”. He said “Then put your bike in here (the lobby again) and welcome”. We all laughed and had a good time.
Remarkable date: Brothers birthday