Fairbanks and the DALTON HIGHWAY

6SEP2014
Haines Junction, Yukon, Canada to Fairbanks, Alaska USA (800km)
Where to start on this day. Difficult. That day was packed with a lot of things that happened. In my head there have still been the stories from Steve about the ice and snow that is waiting for me after Fairbanks on the Dalton Highway, that I dream so long about to ride it. But step by step.
Mireille (in the car) and I on the (motorcycle) left in Haines Junction. I drove ahead, speeded a little and gained time ahead of her. Clouds get darker. Temperature fell degree by degree. I won altitude though. The limit of 2.5 degrees celsius was reached when the rain turned into snow rain. On top the pavement ended and gravel started. After some time potholes have been added to the road conditions. I came to the speed where a white car over took me at a high-speed, and threw stones at me. I didn’t went mad, bud my mood was in a “so what” attitude, and I increased speed as much. We actually didn’t race, but flying over the potholes at chatter temperatures was the same than getting slow over them. So we race. Finally got to pavement again after an hour or so. I ran out of fuel. I needed to refuel from my spare canisters in the middle of nowhere. First time I was rushing to do it since I was curious about wild life and the stories I have read in the internet all year-long. All went fine, I reached Beaver Creek (290km later), got fuel and inside people have been talking swiss german. What a surprise, they had a micro wave and deep frozen burritos. I think I had three of them, and coffee and, by gloves I put in a dryer that was there. 30-40 Minutes Mireille arrived in a car, tired but dry and fine. What a difference I had experienced.
Well it was time for another coffee and another burrito … and off we went.

Actually the US Border to Alaska was close and from there we lost attitude and won temperature. Rain and snow have stopped. Great progress.

Another 200km later, in the tourist office of Tok, Alaska, I heated up and Mireille informed me that she changed her mind and will go back to Canada. reason was she did not have a car insurance for the USA… well I understood the logic behind, however not to think about this at that late stage of the plan to do the Dalton Highway. So we said bye-bye , take care about “wash me, the blue little car” and see you again.
I saw already myself alone on the Dalton Highway, stuck in snow, … however the closer I came to Fairbanks the better the weather, and most of all the temperatures.
I had some trouble to find a place to sleep, after this 800km, either full or to expensive, as i stood all of a sudden in front of a B&B (Bed and Breakfast). Checked in, read my emails, and found an email from Matthias, 2o minutes old, (the German that Steve from Scotland mentioned and that supposed to be arround in Fairbanks) asking when I will be in Fairbanks and if I am interested in doing the Dalton Highway (remember: 4 days and 1600km of gravel [Schotterpiste]). I wrote back that I just arrived and need a shower, need some food and technical stuff and if he want we can leave tomorrow 11am. 30 min later we closed the deal.
An incredible day was not over yet. Asked my land lord if my motorcycle is safe in front of the house. She said, its maybe better to put it in the back yard. And so I did.
I went off for dinner by foot, spent a 1.5hours in some steak house and when I came back to the B&B that one was enlightened by the blue and red of two police cars. What happened was that a guy smoking drugs did not manage to stay on the street and went trough the garden of the B&B and teared down the fence and tried to drive away. Like in the movies. Obviously he was not getting far. But, beside the damage of the fence, no damage on the house and most of all, my motorcycle not parking in the way where he went off. Happy like I was I went to bed.

Day one: Fairbanks to Cold Foot
Day two: Cold Foot to Deadhorse
Day three: Deadhorse to Wiseman (close to Cold Foot)
Day four: Wiseman to Fairbanks
Before you ask, yes the service depots and locations are really names like that.

Woke up in the morning, it was a Sunday, had a great breakfast with Australians, Americans, Canadians and Germans, went off to meet Matthias and we left for buying groceries and an air mattress. Done all that we left. Matthias knew the way since he went already past Cold Foot on his first attempt some week ago. The Sun was shining at like 12 degrees celsius and we have been in good mood. Actually when entering the Dalton Highway we took some pictures of the gate and some funny ones for steve, who was there at the temperatures arround freezing a bit more than a week ago with his buddy from Malaysia (who he met like I met Matthias).
Shortly after there was the stop for the Arctic Circle crossing and a souvenir picture to be taken.
(From Wikipedia: The region north of this arctic circle is known as the Arctic, and the zone just to the south is called the Northern Temperate Zone. The equivalent polar circle in the Southern Hemisphere is called the Antarctic Circle.)

So Matthias, German, from Mainz, took the past two years to travel from Argentina to Alaska, just the opposite of my tour. He was experienced in camping, and so we did in Cold foot.

My tent turned out to be to small for me and luggage, so I left the luggage outside. Matthias cooked some stuff and with my food we had a quite good dinner. We saw some Northern Lights, not strong but nice. It was a full moon at the same time.
My sleeping bag was for plus 10 degrees celsius and that night we had minus 8 degrees. So I was only freezing and not sleeping a lot. Of course I needed to return some drinks in the middle of the night Took me 20 minutes to recover that 2 minutes getting out and back in.

[foogallery id=”796″]
(I don’t know how other friends of mine go fishing for days like that and enjoy it @Stefan). It has been a long time ago that I was desperately waiting for the sun to rise, and of course heat me. Matthias came out of his tent like nothing special; he was way better prepared than me. Except his BMW. The battery on his suffered like I and did not want to start the engine. We tried to start it and then gave up and asked the camping guard for a jump-start cable. We managed to get his bike going. And that’s the reason why the Dalton Highway should not be done alone.

Next after leaving was the Antiguan Pass, a sloping hill with 1400m altitude, so a joke if compared to the alps and the passes there. But its Alaska. Matthias was nervous. Have been here a week before and throwing his motorcycle down because of gliding down sideways on 2cm thick ice on the summit of the Antiguan Pass. I told him many times, everything will be fine. We came to that pass. Ice and snow on the left and right. dry-wet on the road and no challenge at all, that day. We took pictures and went on. the ride to Deadhorse was pure joy, the landscape so unique, the road gravel but dry and enough fuel with us. We checked in in Deadhorse in the “Container Hotel”.
Deadhorse has only one reason to exist. Its oil and gas industry.
The Hotel offered a bed and all you can eat 24/7 for 115USD. No way I camp again. The shower was great !

Next day we had a trip to the coastal line, that is operated actually twice per day and that day the last time of the season. What a luck again. What a luck !!!
Then we went off on 9SEP2014 from Deadhorse. This is the official day I count as the beginning of my tour, THE PANAMERICANA. Up to 18 countries, 3 languages, all climates and an experience of a lifetime ahead of me.

Again we had great weather that means dry roads. Close to Cold foot I said to Matthias I will not camp again. That experience from two days before was enough for me. I need better equipment I said. He agreed and said he camp wherever I find a bed. i found a place, booked in, sponsored him with 30 USD and he did not need to pitch a tent. We met an american guy who was traveling alone with his pickup. We talked a lot and Matthias and I planted the idea to do the same trip with a motorcycle. Would be great for him to follow us.

Next morning we went to Fairbanks, crossing the arctic circle again, and the gate to the Dalton Highway. We had many photo stops and enjoyed the day. Also we had time to wash the motorcycle, which is mandatory, since the gravel is enriched with some salt-sufat-kind of additive. I choose the hostel this time for 30USD and Matthias went to the guy he stayed with the week before in Fairbanks. He was also happy to have “mission completed !” by doing the last 400km, from where he got stuck a week before and now completed in Deadhorse. He want to leave via Vancouver by mid OCT2014. So we left each other, win-win and with a smile.
So this was it, the start of the Panamericana, my big adventure. Again blessed against all signs the weather will be bad, we did so well and had so much freedom on that part. See the pictures that tell more than I can express in words. 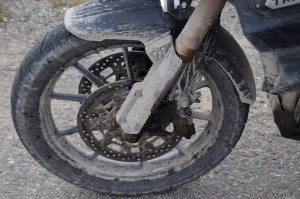