this is the insight experience of my Chile travels. Chile has such dimensions that I crossed in and out quite a few times. That was, by the also the reason why my passport filled up quickly.

Entering Chile was quite easy there. Almost nobody on the border and only trucker, no tourists. However we discover something crazy. The border agent from Bolivia who stamped us for leaving Bolivia had a very very very good time in his little cabin over there. With other words he was fairl drunk or on other stuff. Who knows …
It was cloudy there and the lake didn’t show his full beauty. We moved on to Putre (>1500 peoples village, but capital of the province) and spent the night there. In the morning we came back to the lake and took some nice photos from the lake and some Flamingos. Then we left for a gravel, sand off road which took us hours later to the salt lake of “Salar Suriere”. To get there was quite tough and challenging. Only some trucks who have been commuting with minerals from the Salar de Surire to Putre and us. No cars. No Tourist. Nothing. Nothing but an awesome countryside. Rocky. Stony. Sandy. And then again some little oasis. The Salar de Surire was actually not that spectacular but to get there and to get away! After we left there has absolutely been nobody. There had stages between crossings where you needed to guess where the path its, since the last car was there weeks ago. The GPS maps worked fine though and helped a lot for at least navigating into the right direction. We found our way through the loneliness. A really great experience and a blessed day.

Then we have been reaching a very little village with exactly two little hotels right at the border to Bolivia. That was the place to rest after this adventurous day. We checked in and then found out that they are baking bread right in the kitchen. Topped with a little butter it tasted so well that we almost didn’t need dinner. It was great. Next day we crossed into Bolivia again. So it was a good experience to visit he north east of Chile, which for sure not many tourists do, but was good off road riding on two wheels. Breath taking north east of Chile. Eso es Chile !

[foogallery id=”1637″]
The next time, some few weeks later, Liran and I came to Chile after the Laguna Route in Bolivia. We left Bolivia with a little border crossing office in the middle of nowhere and where Chile did not even have authorities to check the border. After some 5 km we hit a rod with a really good asphalt. We have been kissing that Asphalt since it was the first asphalt after almost a week. That road took us 45km and almost 2000m in height downhill to San Pedro de Atacama. Temperature was much higher and we sweated hard for the first time since weeks. San Pedro de Atacama, at the entry of the Atacama desert (which is the driest place on earth) is a pure touristic place. We felt more for a rest than to explore the desert, enjoyed good food and 2 bike free days.

[foogallery id=”1643″]
We left via the moon valley, which was actually not that spectacular (or we have seen too much before) and hit the road west and then south. 1500km to go to Santiago de Chile. We did it in two days, where the 2nd day was exactly 1000km. We stopped for the “Hand in the desert” nearby Antofogasta, which is a touristic highlight beside hundreds of kilometer of dry sandy desert.

[foogallery id=”1652″]
The highway No. 5 in Chile is the north south connection of Chile. Every now and then a mining facility and a lot of trucks, but else a 4 lane highway built to move on and to keep going.
I wasn’t aware that the distances are so big, and that the climates are so different in Chile.
Eso es Chile !

Santiago de Chile !
What a place after all this empty, flat, straight and dry riding. The capital, very well developed, less traffic than La Paz or Lima and the economic center of Chile. Liran has some friends from his childhood, Mihal and Leo with their three kids, who just moved from India to Santiago de Chile some days before we arrived. Great great hospitality and we enjoyed a lot to stay there. We laughed, played with the kids, enjoyed a lot the break from the riding and to charge our batteries. It was a little more than a week that we spent there and I hope to see these fellows again one day somewhere in this world.

Further I met my cousin Hans, who is living in Chile more than 25 years. He raised his kids here and is doing/supporting the missionary with the local churches in Santiago, all over Chile and also the Spanish speaking christian community in Latin America. It was great to meet him, speak our home accent “schwäbisch” and to meet the first family member since I left Germany back in August. He showed me around in town, had great views from a central hill in Santiago and an awesome Ceviche. Although from Peru, that Ceviche was awesome. Ceviche is a fish dish, cold, with some herbs and onion, just great.

[foogallery id=”1657″]
Liran had some issues with his rear rim, that we fixed in 2 days. I was waiting for shipment from Germany, with a replacement bag for my broken Ortlieb bag (the zipper didn’t work no more and got a new one on warranty) and a new rain jacket (Mine got destroyed during my accident in Peru) that my brother bought and send me.
We changed oil and enjoyed the time.. The shipment did not make it on time before we left, but my cousin Hans gave great support and forwarded it a few days later to the south of Chile where I could pick it up in Punto Arenas.
Just to line up: 1650km from San Pedro de Atacama to Santiago and from there we did another 1000km in one day to arrive in Osorno and that’s only about one third of the length of Chile. The Highway 5 in Chile is the one and only north south connection an 3600 km long. We did not spend time in the Chilenean Andean mountains for the reason to arrive in Ushuaia secure and before it gets really cold down there. From Osorno we switched over to Argentina and drove south until we hit Chile again on the way to Ushuaia (details on the Argentina chapter). On the way back from the end of the world in Ushuaia, we took the ferry from Prosegur to Punto Arenas in Chile. That area of Chile is low populated, but Punto Arenas surprisingly had a lot of things offer, such as motorcycle parts and tires. Hub cities in the south of Chile, which basically fulfill the function of a harbor or mining with servicing the transit and a little tourism. Eso es Chile !
One more sentence about the south tip of Latin America. It belongs to Argentina, but it wa snot always like that. There was a time when Argentina took it from Chile by force and later was officially annexed to Argentina with a tradeoff in the north of both countries.

[foogallery id=”1663″]
Heading north we left Argentina for Chile, came back to Chile and came back to Argentina… collecting stamps in the passport and filling up pages, which was a problem later. The highlight here have been on the Argentinean side (and I will ride about it in the ARG chapter), until we came to a place that is called Chile Chico. Being back in Chile, driving west to access the “Carretera Austral” was one of the best rides on my entire journey from the perspective of water meet mountain and the road goes right through it.
The gravel road was of very low traffic (3 vehicles per hour), sunny blue sky and the lake next to it that changed color after every corner and flanked with snow topped mountains. Breath taking !!!
I wished that road never ended. We stopped for fuel and decided to stop riding at 4 pm, against the plan but in favor to enjoy the scenery. Creation at its best !!! Eso es Chile !

We found a little place to stay with super super friendly people and a strong internet connection, which surprised me a lot. We got told that there is one foreigner from the Netherlands living in town, so we went over and had dinner at the restaurant where Annewiets was working. That was a cool evening. The only ones in the restaurant, we played the music we liked, chatted loud and spent a great time.

[foogallery id=”1672″]
Next morning we left for the last 100km to get to Puerto Rio Tranquilo to see the marble caves. A must see on the Carretera-Austral. We stayed there 4 nights, for the reason of feeling for a rest, a little issue with my stomach (first time), partly rainy weather, repairing my pannier holder and eating steaks and steaks and steaks. So we slept, rested and ate a lot steaks in Puerto Rio Tranquilo. In that four days even the locals get used to us. Everybody else is just stopping for some hours or maximum one night. It was cool there. We had fun. The locals had fun. I liked it. Eso es Chile !

Then we took the Carretera-Austral further north, rode dry (others reported they had only rainy days one and two weeks before) and saw amazing scenery of forest, lakes, rivers, the sea (we took 3 ferries), mountains little farms, waterfalls and much much more. If you come to Patagonia and this part of South America, please spend some time on the Carretera-Austral. It’s truly worth it ! Eso es Chile !

Reaching the north of the Carretera-Austral we stayed 2 nights at Puerto Varras before leaving Chile the last time towards Argentina (Bariloche). Liran and I split up there after riding together for 2 month and one week. It was good riding together and we split up for a while. I wanted to go my way and to think about what will be next. It’s been months that Africa was running through my head now and I needed time to think.

The road from Puerto Varras and then towards the border is a really nice one. Riding through the forest, with nice overtaking sections. I enjoyed it!
Funny was though, that first the border crossing was super quick (3 weeks ago at the same border it took 2.5 hours to go through all the process) and second they just played the sound track of Easy Rider at the passport control. We laughed. It was just great !!!
So Chile said “Bye-Bye” and “Please Come Back!” with great desert sceneries in the north, the breath taking Atacama desert, the vibrating capital city of Santiago the Chile, long distances, low populated country side, great food, super friendly people, safe country and with the one and only Carretera-Austral that leaves you simply speechless. 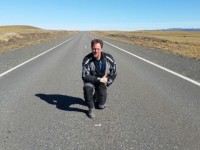